Fu Hsi is the legendary Emperor of ancient China, legendary because there are no actual dates or records confirming his existence. He lived in a time before books when teachings were carried on by word of mouth. These oral teachings had to be memorized and then passed on. There was a diagram that was used to help memorize and expound the teachings. This drawing could have been scratched on the ground, or on a tree or a rock. They could have been made by arranging stones or branches on the ground.
For two thousand or more years these teachings were passed on orally from teacher to student. The teachings revealed an order to nature and provided guidance in life. They were deeply embraced and carried on, person by person, over thousands of years. 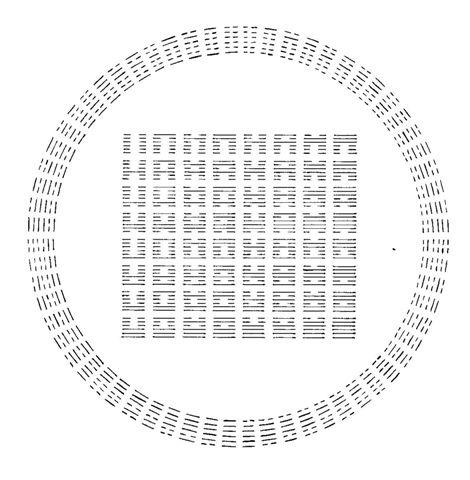 Fu Hsi’s map or drawing consisted of a particular organization of solid and broken lines with a very specific placement and sequence. These lines were related to the four (or eight) directions and to the four seasons. This map showed a specific balance of opposing forces. If there was a solid line on one side of the circle, then there would be a broken line on the opposite side. Every line was in balance and neutral. The lines were also placed in a sequence to explain the changes in the light and the dark. They were explained in terms of what was firm and what was yielding. These explanations were passed on verbally over the centuries. This map was in fact the first true calendar or almanac. All opposites were balanced and all changes had their proper order. In this way man lived in harmony with the universe and life. This was the foundation of the oral teachings of antiquity.
Around 1200 BC some of these teachings were written down for the first time. At the same time the liberty was taken to present a new sequence or arrangement. The traditional arrangement of Fu Hsi became known as the Sequence of Earlier Heaven or the Primal Arrangement. The new sequence became known as the Sequence of Later Heaven. It wasn’t long before the new sequence with its written explanations became the prominent one. In fact the Sequence of Earlier Heaven has been marginalized or trivialized ever since. A new order was apparent and the old ways lost their appeal. Yet over the next 3000 years this Sequence of Earlier Heaven has not disappeared. It still stands as the most natural sequence.