The essence of the I Ching is that it is based on a concept of duality.  When one observes life and its changes, one comes to perceive that in every phenomenon or cycle there are two extremes. Originally these extremes were considered as the firm and the yielding, and the light and the dark. Once the two extremes could be recognized, then the cycle between them becomes apparent. It was to further understand this cycle of one extreme in relation to the other that the sequence of change became functional. These two extremes were given the symbols of a solid line and a broken line.

The solid line represented the firm, the light, the strong, the father, creative force, the active principle and male energy, to name a few. At a later date this solid line became known as yang.

The broken line represented the yielding, the dark, the weak, the mother, receptive force, the passive principle and female energy. At a later date the broken line became known as yin.

After the greatest light, will come great darkness.

After great darkness, light will return.

After great receptivity, creativity will emerge and ascend to its peak.

In this way the cycles of change were observed and the sequence came to be known. 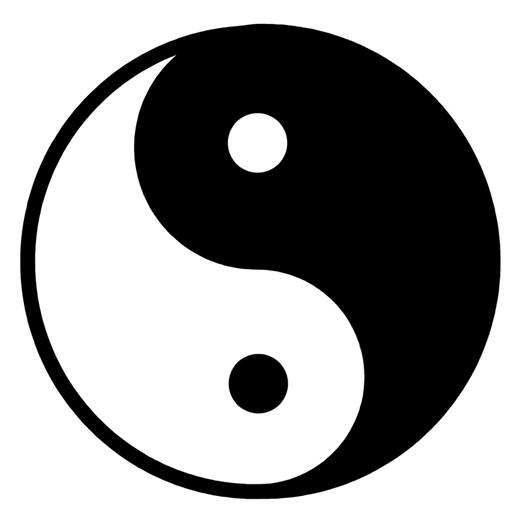 In any cycle there are two extremes.

One half of the cycle moves towards darkness

And the other half moves towards light.

Daylight is either increasing or decreasing.

To further elaborate these changes the lines were doubled

This divided the two phases of light increasing and darkness increasing

And created four phases of the cycle.

This is equivalent to the four parts of a day:

The solid line of increasing light splits in two and gains a light half and a dark half.

This is also equivalent to the four seasons of the year.

The solid line of increasing light splits in two and gains a light half and a dark half.

there is still more darkness than light.         more light than darkness

The broken line of increasing darkness splits in two and gains a light half and a dark half.

The four combinations of two lines representing the four seasons, all split in two. Making eight phases to the cycle.

In the family circle:

We now have our ancestors in the heavens watching over us!

The sequence of change and the appropriate places of our ancestors are established.

In 1150 BC in the time of King Wan and his son the Duke of Chou, a new level of understanding was applied to the changes. It was a numerological understanding. This new understanding became the primary focus over the next three thousand and two hundred years, right up to the present day.

This process diminished the practical, astrological, experiential form of deduction, and encouraged more abstracted mathematical reasoning. (In much the same way as Plato’s logo created an abstract God of all, separated from nature. The masculine became predominant over the feminine.)

If the sequence had not been altered, this union would have been formidably perceptive. However, the essential clarity of the changes became altered and obscured. From this point on, much seemingly logical deduction became warped and distorted, or perhaps it would be better to say, less natural.

This site represents an attempt to restore the original natural sequence to the changes.

The lines of each trigram were given numbers according to whether they were odd or even. These numbers were added together for each trigram, with the result that each trigram could total 6, 7, 8 or 9.

6 and 8 were even and became the feminine trigrams.

7 and 9 were odd and became the masculine trigrams.

The first daughter has the broken line at the bottom or first place.

The second daughter has the broken line in the middle or second place.

The third daughter has the broken line at the top of third place.

The three trigrams totaling 7 became the three sons. Two even numbers added to an odd number becomes an odd number and is therefore masculine.

The first son has the solid line at the bottom or first place.

The second son has the solid line in the middle or second place.

The third son has the solid line at the top of third place.

This determined the family members. To each trigram was added a unique quality that would closely resemble its energy and character. This attribute was deduced from the position of the lines in the trigram and subsequent logic. To this was added a nature symbol that had a close relationship to the quality given to each trigram.

In this way each trigram represented a family member with a unique characteristic and a corresponding symbol in nature.

The Mother, The Receptive,

The Father, The Creative,

The trigram of the first son consists of the solid line at the bottom and two broken lines above. The lines count from the bottom up.

Here a solid line has sprung up beneath two broken lines. It signifies the first ray of light showing in the darkness. It is the sudden sound where there has been silence. Here is the mother’s first son. She is familiar with femininity but this is her first boy! The first son is always new and shocking to her. There is nothing to compare to. So the attribute for the first son is the arousing force, and shock. The nature symbol is thunder.

The trigram of the second son consists of a solid line between two broken lines. Light surrounded by darkness. Strength with weakness above and below. Mother knows what to expect. The second son is not shocking but he is an added difficulty to mother. She will not be the same with him as she was with the first son. The second son has to watch out for his older brother who has more strength than him. The older brother thinks his younger brother stole his mother from him. The path of the second son is fraught with difficulties and danger. He is not allowed the freedom of the first son. His attribute is danger and depth. The nature symbol is water (deep dangerous water) like water in an abyss or chasm, or the water of a dark storm.

The trigram of the third son consists of two broken lines below with one solid line resting on them from above. Light resting on darkness. Strength resting on weakness. The third son has two older brothers. He learns to keep still because he has two older brothers who can and will pick on him. He lets them make their own mistakes. He does not get pulled in by them. His attribute is keeping still or resting and the nature symbol is the mountain.

The trigram of the first daughter consists of one broken line at the bottom and two solid lines above. Here gentleness comes up in the midst of strength and exerts its influence. Darkness in the midst of light. A bit of silence where there was noise. Through sensitivity and persuasion the daughter influences her father. The forces of strength are affected by softness. Darkness begins to increase. Her attribute is gentle penetration and the nature symbol is wind and wood. Like wind blowing through the trees, gentle but influential, there is an effect.

The trigram of the second daughter consists of one broken line between two solid lines, darkness within the light. Like the blue within the flame. There is weakness in the midst of strength. There is action and strength above and below but there are conditions. To get past her older sister’s influence, she sees clearly. She will draw attention to herself visually. Here there is clarity and dependency. The nature symbol is fire. Fire gives clarity but is dependent on its fuel for sustenance.

The third daughter consists of a broken line on top with two solid lines below. The first daughter is listened to and the second daughter is seen. They both want to tell the youngest what to do. She laughs and does what she wants. She is motivated by happiness. Worries (broken line on top) will not dampen her spirits. She wants to have fun. Her attribute is joy and her nature symbol is the lake. She is the joyous lake.

Broken in the middle: He is listening carefully.

Solid at the bottom: His feet are moving. The foundation is firm.

Solid in the middle: He is active anyway.

Broken at the bottom: The foundation is insecure.

There are obstacles on the path.

Broken in the middle: He does not move.

Broken at the bottom: The foundation is yielding or insecure.

Solid in the middle: He is active.

Solid in the middle: She is active.

Broken at the bottom: The foundation is yielding.

Broken in the middle: She does not move.

Solid in the middle: She is active.

Broken in the middle: She does not move.

Broken at the bottom: The foundation is yielding or insecure.

Another way to view this is:

Each person has two parents.

Each parent has two parents and we have four grandparents.

The eight great grandparents have two parents and now we have sixteen great-great-grandparents. 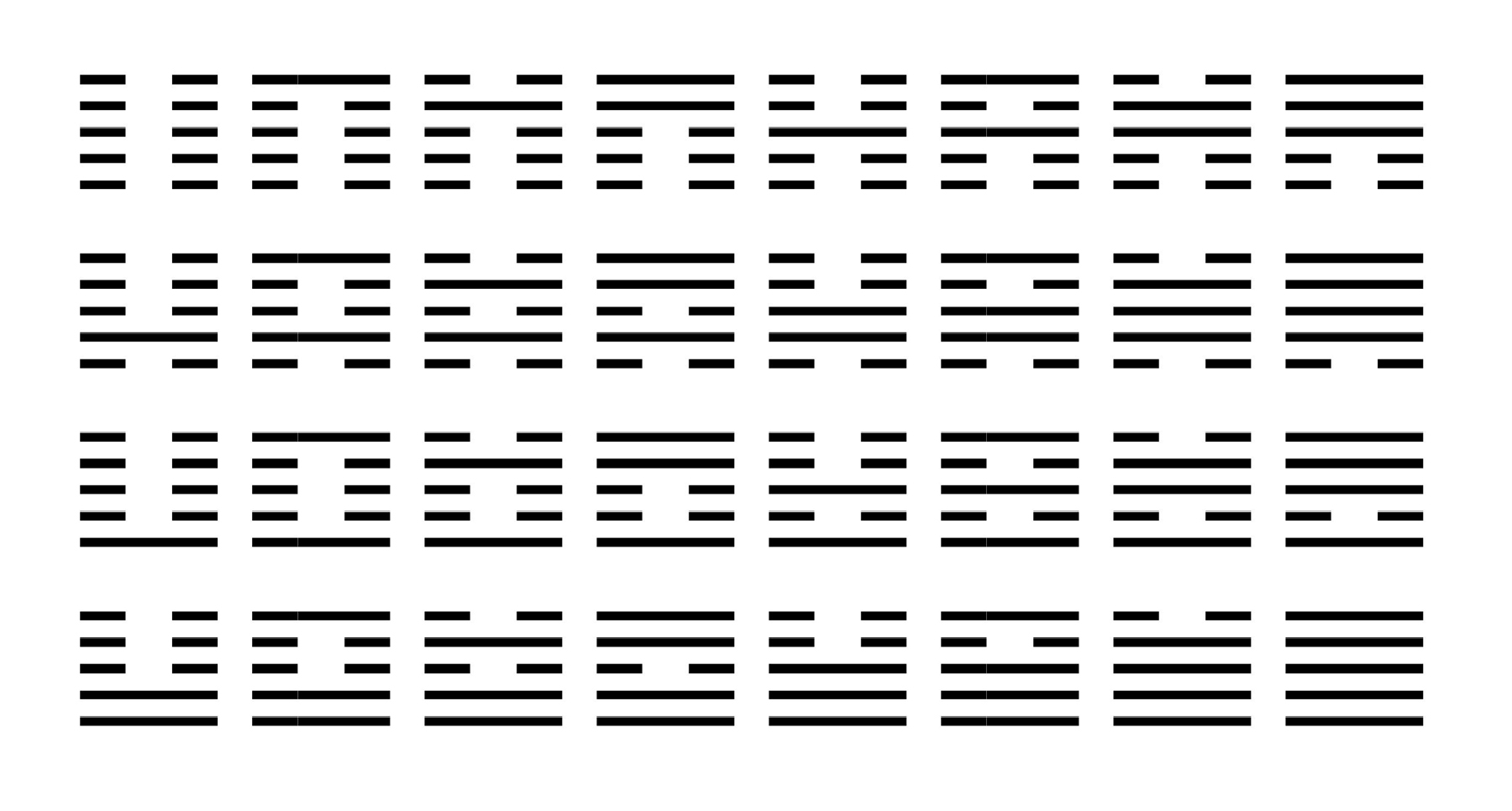 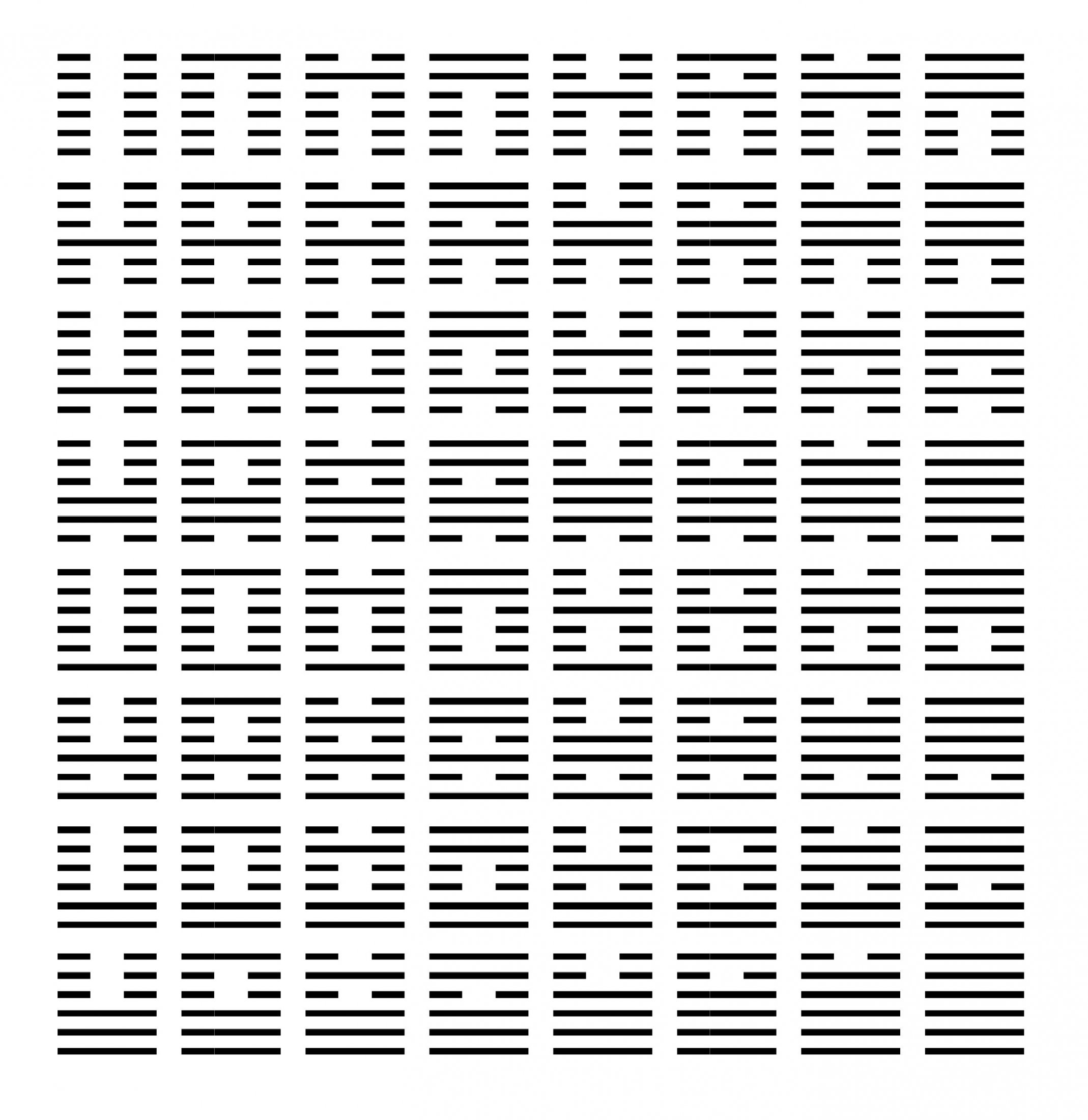