Named Wu, he was the son of King Wan. He was unable to free his father from prison or to prevent his death. He did eventually gather together enough forces to overcome the emperor responsible for his father’s death. In so doing he brought about the end of the House of Shang (Yin) and ushered in the beginning of the Chou Dynasty (1150 – 249 BC). From little power he ascended to supreme power. He had lost respect for the traditions of the ancestors and the old ways. He became determined to bring in a new era with new teachings to replace the old.
He established the new sequence of trigrams written down by his father as the new order. He then wrote down meanings for each line of the changes in order to reinforce the teachings of the new order.
The Duke of Chou and his father King Wan were not the first ones to put words to the changes. The changes had been an oral teaching passed on for thousands of years with great respect for the originator of the changes, Fu Hsi , and for the ancestors. The Duke of Chou was the first one to establish the written version of the changes. This version embraced the efforts of his father to set a new order to the universe and to the changes. This new order was called the Sequence of Later Heaven. 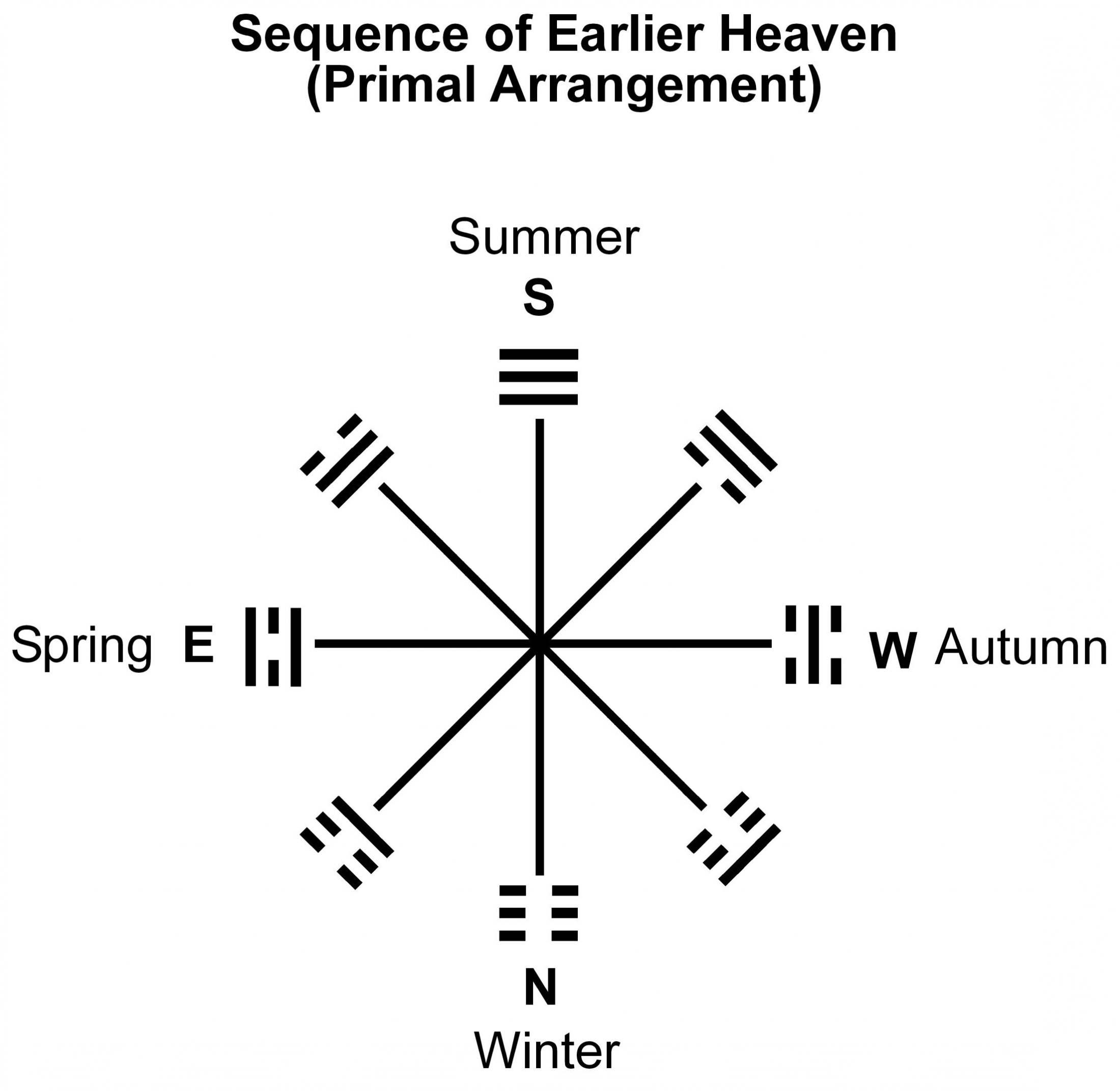 Since most rituals and their timings were tied up with the old ways, a new priesthood was established to bring in the new and to convert adherents of the old ways. The old ways were considered a superstition and were no longer relevant to the new times. An era of trivializing the old conclusions and long established teachings of Fu Hsi began. Along with this came the persecution of anyone teaching the old ways.
The condemnation and trivializing of the Arrangement of Earlier Heaven has continued from the time of the Duke of Chou to the present day. Even now in the twenty-first century there are warnings about the evil Fu Hsi and the bad luck of the Earlier Heaven Arrangement.
The new way moved away from being determined and guided by astrological insights. It moved away from the horary or practical advice that astrology and almanacs have always had. The new way was based on a numerological perspective which had been imposed on the seasons and nature. This created an abstract mystical view as opposed to the natural ways of the ancients. Astrological perceptions became obscured and mathematical perceptions rose to the forefront.
The mathematical perspective enhanced metaphysical speculation and contemplation, but it diminished astrological clarity and the ability to perceive the obvious changes in the light and the dark, and in the firm and the yielding. As this new system grew, a numerological manner of determining proper behaviour developed. This concept of proper behaviour was furthered by the social-political will of the Duke of Chou. There was a growing detachment from old rituals and teachings that were based on actual heavenly or celestial phenomena. To this day scientific thinking, and to some extent medical and political science along with religion have trivialized or even demonized the meaning of one’s relationship to nature and the heavens around us. It is assumed that we have free will and are beyond the effects of nature! The old ways became obscured but did not disappear.
The new ways allowed for new and exciting insights into change. The mathematical associations developed many useful insights into the internal workings of each hexagram and its lines. Insight and discovery went into the microcosm of the changes at the expense of the old ways tied to the macrocosm and astrological deduction.
The Duke of Chou took control and established the new order. He wrote down words to the changes with preference to the new Sequence of Later Heaven. This brought a new wave of insight into the changes, but something was being left behind. The way of the ancestors was impaired.
Over the next five or six hundred years this Sequence of Later Heaven became accepted. More and more scholars added words and ideas in the same mathematical manner. Literature increased and the old ways of Fu Hsi took a subservient role in determining the implications of change.