The next major influence in the Changes was Confucius. Unfortunately by the time of Confucius, the divine right of the emperor held more prevalence than the wisdom of the ancestors. Although by this time King Wan and the Duke of Chou were also ancestors. The wisdom of Earlier Heaven with its sequence and order was now background information and the Sequence of Later Heaven was the established way.
It was through Confucius and the Doctrine of the Mean that the concept of the superior man and his behaviour became integrated into the I Ching. Although there were many valuable contributions to the I Ching since the time of Confucius, it is his contributions that stand out most prominently today.
The seeming infallibility of the Emperor and the Sequence of Later Heaven became the standard and the measure of the mean. Unfortunately, the astrological clarity of the light and the dark in heaven and on earth, that was inherent in the Sequence of Earlier Heaven was lost or at least compromised. 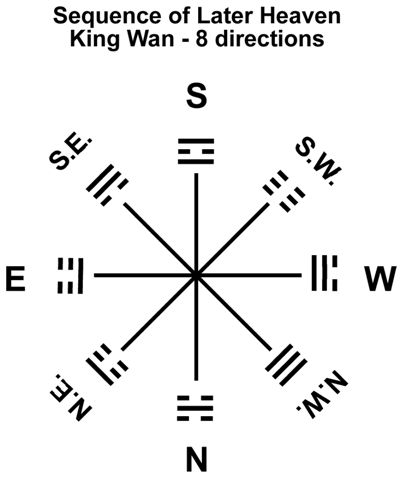 It was the path of the Sun (or Heavenly Emperor) that determined the way of heaven or of the superior man. It was the sequence of the changes that provided the measure of the mean. One could think of this measure as a zodiacal calendar or heavenly map.
When one looks at the Doctrine of the Mean and the Way of the Superior Man from this perspective, new insights arise. One begins to see Confucius as a government official, and advisor-priest. His teachings could be seen as a form of propaganda or dogma designed to encourage others to follow the new ways of the emperor rather than the ancient ways of Fu Hsi.
The Doctrine of the Mean and the Way of the Superior Man encourage people to support the emperor, and guide them into following the rules and decision of the emperor. The emperor was infallible and could change things when he saw fit to do so. His decisions were more valid than those of any preceding ancestor. The new ways were supported and the old ways marginalized and diminished. This was not so much a fault of Confucius but rather the nature of literacy at the time. The mean had become abstracted and numerological, rather than clarified and astrological.
Cosmology became obscured. Mysterious became the way of the changes. The idea of a great secret within the changes prevailed. The secret was presumed to be the inner essence of life but it could just as easily have been the original astrological nature of the changes and the teachings of Fu Hsi which maintained a presence within the folklore and magical rituals of the time.
The mathematical abstractions of the I Ching allowed for the addition of political suggestions and convenience. Political caution and the way of the superior man became the accepted standard and the masses were subsequently educated. It is apparent that Confucius had to honour and increase the way of the emperor. To keep the people content with their circumstances and passive, was of great value.
Confucius was able to present a subjective mysticism and relevance within the context of the Emperor and his dynasty. To go against the Sequence of Later Heaven would cause disaster for Confucius and anyone else who followed suit. Some of the teachings of Fu Hsi survived and were still being referred to by oral tradition and folklore. Hence there arose the need to present a new affirmation of the Sequence of Later Heaven. A renewed effort to do just that began. This would further diminish the old ways and set up new guidelines for the people to live by, and for the priest to teach by.
If one considers the Sequence of Earlier Heaven as an essentially valid astrological calendar, then a new perspective becomes evident. One begins to sense flaws, questionable intentions and logical inconsistencies within the Doctrine of the Mean and in the way of the superior man.
It is this confused abstraction, perpetrated over the centuries, that has allowed scholars to consider the Chinese mind as obscure, profound and unfathomable. They subsequently held it in reverence for its seeming profundity. It is possible that this obscure profundity was simply a comedy of errors, or an ancient version of “The Emperor’s New Clothes”.
It is possible that the ancient Chinese thought of Fu Hsi was far more lucid and scientific than has been assumed. It is possible that with the change in the order of the trigrams, came the decline of an era of clear insight.
The divine ways of Fu Hsi became a more vulgar or vernacular form of language through King Wan, the Duke of Chou, Confucius and the Sequence of Later Heaven. This later sequence was not so much a sequence but rather a random ordering of apparent opposites with a conscious attempt to change the old, and guide the people according to political convenience.
The I Ching had degenerated into a rigid sense of duality and contrast without any realistic sense of time. Perspective on the sequence of events upon which the true meaning of the changes depended was overlooked, obscured and misinformed. The intrinsic clarity of the changes was replaced by a sense of mystery and perplexity. This seeming profound perplexity was in fact a deviation from the mean and the inherent lucidity of the changes.
The oral teachings of the past, based on observations of nature, were replaced by an abstract mathematical speculation. The calendar had lost its astrological basis and had become a numerological exercise. Belief in the value and association of numbers became more valid than that of one’s being a part of nature. A concept of nature and life replaced the reality of nature as the standard or mean.
King Wan and the Duke of Chou lacked sufficient insight into the ancient oral teachings of Fu Hsi. The value of the natural (astrological) phenomenal sequence was underestimated or ignored. This was a significant error in judgement that has perpetuated over 3000 years of ignorance and distortion. A little knowledge went a long way. In this case the emperor was fallible, acted impatiently and propagated a deviation from the mean or true sequence. This was a deviation from nature as the standard, and from the understanding or belief that the natural order of things is divine.
Once again thoughts about the decline of an era come to mind.